Many Christians, members of the religious group to which I belong, have been trashing the word ‘religion’ for a long time. They shouldn’t, in my opinion, especially when referring to their own Church. A follower of Christ may be called upon to answer someday whether he or she claims this religion.

News sources all over the world openly reported countless incidents when this was true during 2014.

Taking a word for its literal meaning gives us one reason for accepting ‘religion’ into our vocabulary without prejudice. The basic definition my dictionary offers for the word and what most people, if pressed, understand it to mean is simple and direct.

“a personal set or institutional system of attitudes, beliefs and practices” 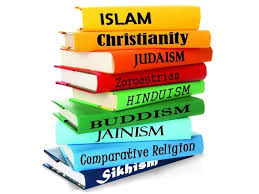 Our world is made up of people who practice a multitude of religions. Jews, Muslims, Hindus, Sikhs, Buddhists, Christians, Atheists, Confucians and more. For some reason, Christians have no problem with saying, for instance, “The Islamic religion.” They may even study a course in college comparing world religions.

But they don’t want to be called ‘religious’ themselves.

Many Christians throughout the world regularly recite either the Nicene Creed or the Apostles’ Creed in their church services. Other creeds exist, but these two are most well-known. The Creeds are statements of faith. The words describe the belief system of a Christian. It’s important for a believer of any religion to know and understand his or her personal faith and remember that a creed isn’t synonymous with “rules.”

Followers of Christ tend these days to emphasize their relationship with God, and a relationship is important. We revel in the fact that we can call God our Father and that Jesus is not only our brother but our friend. However, doctrine–one’s belief system–is also important. Here are a couple of good reasons why.

Anyone hoping to share their faith with another must be able to communicate their beliefs. We can talk all day about our personal relationship with Jesus, but when the rubber meets the road, it comes down to “What do you believe in?” How can we help win someone to the faith without telling them who Jesus is and that he died to save them? Our core beliefs are the essence of the Gospel.

Christ himself had a conversation with a man named Nicodemus and witnessed to him with the words quoted in John 3:16-17, among others. Jesus told this Pharisee that he came to save the world. Christians today use these words of Christ more than any others to witness to people. I dare say there hasn’t been a professional football game played since the 1960s that hasn’t had some guy holding up a huge sign with that scripture. If those words were good for Jesus, they’re good enough for us. Nicodemus became a follower, after all.

Jesus talked about his relationship with his followers, but most of all, he said, “Believe in the Father; believe also in me.” Over and over again people Jesus encountered for healing were restored because of their faith. Their belief in who he is. Likewise, spiritual healing comes as a result of our belief. It means a lot to God and to his Son that we believe.

Our belief is what allows us into the relationship we talk about with such fervor.

Furthermore, we can’t help people in their walk with Christ (Jesus calls it making disciples) if we can’t speak about our own faith in Christ. It’s that simple. Again, we can talk all day about our relationship, but another Christ follower has to find his or her own way into that unique communion with the Lord.

What’s In a Word?

I understand when people say things like, “I’m not religious, I’m spiritual.” Or “Christianity isn’t about religion, it’s about relationship.” Or “Lose your religion.” They usually say those things because other Christians were sometimes less than helpful when they tried to enter the kingdom. The approach was hard, judgemental, or downright scary. So they blame ‘religion.’

If we’re honest with ourselves, we know it’s not ‘religion’ (by definition) that’s to blame; it’s people. Ever since Moses received the law from God, we’ve been guilty of misinterpreting and manipulating God’s word to suit ourselves. Then we want to make others follow those rules too. For people who do that now, as then, Jesus had fiery words.

“Woe to you, because you load people down with burdens they can hardly carry, and you yourselves will not lift one finger to help them” (Luke 11:46).

I speak from personal experience that it’s still true. It was part of my upbringing and I’ve had some ‘spiritual’ folks bang me over the head with their ‘spirituality’. In fact, I confess that at one time, I too was a spiritual bully.

As I said, any believer of any religion may one day be asked to give answers about what they believe.

We Americans often think we’re being persecuted if the government, our bosses or some organization take actions we disagree with. We can be more vocal about what we are against than what we’re for. Many of us take issue with the smallest slights, when Christians in foreign lands are truly suffering because of their beliefs. These people don’t pass under our daily radar. If ever. Maybe when there’s something in the news. I don’t speak about all Christians, because many are really trying to make a difference.

But what’s inspiring is that those truly persecuted Christians consider it a privilege to “claim their religion.” So that’s what they do.

In most of these countries true persecution begins when a Christian claims his or her religion. At baptism–the public statement of belief–that person will become estranged or ostracized from the family and the community. If that country is in the very least accepting of Christianity, believers may worship according to the government’s standards. If there’s no tolerance at all, those Christians worship in secret.

Many times they don’t have it that good. Their lives are at risk. The opposition to Christianity in those countries won’t ask, “Do you have a relationship with Jesus?” They’ll ask something more like, “Do you believe in this Jesus?” “Are you a Christian?”

Not a friendly environment.

Name It, Claim It

We don’t need to be afraid of the word religion in referring to Christianity. Knowing the security we have in our relationship with God will encourage us to boldly claim our religion instead of “losing” it.

Talk about your relationship with God. It’s okay because that relationship is what sets us apart from other religions. But spreading the Gospel message begins with doing what Jesus did: preaching the good news of the kingdom. The Good News starts with talking about Jesus. Tell people what he did and why he did it. Tell them about some of those beliefs in your creed. He rose again as he said he would. He’s coming back to claim his own.

If you can get that message across, you may have helped win someone over just as the Spirit led you.