A small group of 12-steppers, we talked about how we would handle the holidays. We knew the late-year holidays of Thanksgiving and Christmas could prove challenging.

Since some of us were alcohol, drug and food addicts, we knew that the presence of these particular ‘substances’ would be cause for us to be cautious during the next few weeks.

And it wasn’t even Halloween yet.

I shared my own feelings and concerns during the meeting, moved by the Spirit and by what I had heard around the table. As always, however, there was more in my heart and I left the meeting not having expressed it.

But I knew exactly what it was.

I thought of Mary, the mother of Jesus.

I thought of her entering the eighth month of pregnancy. She must have been feeling very much like a woman about to give birth–mentally, physically, and spiritually.

Mentally, she would have been preparing herself for what was ahead in her new role as a mother. We who’ve done that think of all sorts of wonderful possibilities. We begin to prepare. It’s called “nesting.”

Physically, she would have been getting heavier and more awkward in her gait. (Although I find it difficult to visualize her that way.) Her center of gravity would have been a little off. Perhaps she was frustrated trying to fasten her sandals. I wonder if her friends were helping her along with advice and old wives’ tales.

Oh, but spiritually. Let’s go back to the beginning.

Mary was approached by one of God’s messenger angels, Gabriel. He told her she would conceive a child by the Holy Spirit. He also told her that the child would fulfill prophecy. Gabriel called Him “the Son of the Most High.” “A savior which is Christ the Lord,” is how the angels proclaimed it to shepherds the night of the baby’s birth.

Then Gabriel said, “And you will name him Jesus.”

Can you imagine being a virgin and finding out, not only that you are going to have a child, but also that the baby will be a boy and you already know his name? Furthermore, He will be one of God’s promises? From an angel!

That gives a whole new meaning to “ultra sound.” 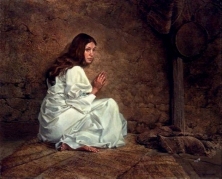 Mary must have been experiencing the ultimate in anticipation around the beginning of her eighth month. She was going to be a mother. She was going to have a husband who was also faithful to God to help raise their son.

And that Son would be the promise the world was waiting for.

So I think that we Christians are a little like Mary in a way. We want that day to come so we can celebrate the wonder of Jesus’ birth; the birth of a Savior who still lives.

Those are promises that can keep us from obsessing about the holidays. They’re promises of hope.

Because of God’s plan, we have abundant life here and now. Because of Jesus’ birth, death, and resurrection, we can have life in eternity with Him. How much power can anything less than Him really have over us, if we trust in God today and let Him take care of our tomorrows?

After all, He promised He would.