This CD, with just over one hour of traditional sacred music, wouldn’t have been my first choice. However, because it boasts such a variety of artists, I couldn’t resist. While not a fan of country music, I still found this offering enjoyable.

Most of us have favorite singers or musicians. Most of us are on the lookout for a CD by that person. In this instance, I was in the mood for variety so when I saw it in the library display, I gathered it up.

Overall, the songs provide as much variety as the selection of artists. And, for the most part, they’re songs we know. Or at least have heard over the years playing in elevators or while shopping at the mall. It’s called inspirational music because the songs included are about the Christ child, Jesus. Only a couple of them hint at something other than Jesus’s birth and the event of Christmas and the night he was born. 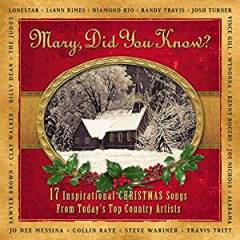 My Favorites are “O Come, O Come Emmanuel” by Diamond Rio; “Breath of Heaven (Mary’s Song)” by Vince Gill; “What Child is This?” by Jo Dee Messina; and “The Christ (A Song For Joseph)” by Billy Dean. And while no one sings “Mary, Did You Know?” like the song’s author, Mark Lowry, Kenny Rogers and Wynonna did a more than respectable job.

The only track I didn’t care for was Leann Rimes’ rendition of “O Holy Night.” That’s a difficult song to sing, for sure. But her arrangement sounded to me more like someone wringing every note of the (USA’s) National Anthem up and down the scale. Perhaps Leann is an acquired taste, but I like to be able to sing along. Especially with Christmas music.

Rather astonishing to see how many of these songs are in the public domain.

The mix on each track is great. No one’s voice – no matter how much I may have disliked it – was overpowered by the background music. Nice blending of voice to music. My ear detected violins (or does ‘country’ music make that fiddles?) a couple of times and that added to my enjoyment. I’m partial to violins/fiddles.

If you’re a country music fan and enjoy sacred Christmas music, I recommend you listen to this one. You’ll hear the traditional favorites and maybe even learn a new one.