Released in theaters March 2016, Zootopia is now on DVD. I have to say if you didn’t catch it at the theater, you must see it now.

Zootopia is smart, funny, and full of color. That’s typical of Disney movies. We can also expect endearing characters, a great plot, and a moral to the story.

Zootopia brings it home in all respects.

A cute little bunny, Judy Hopps, is determined “to make the world a better place” by becoming the first rabbit police officer. Her parents prefer she stay at home with her 275 brothers and sisters living a risk-free life. But carrot farming isn’t in the stars for Judy and she knows it.

She attends Zootopia Police Academy and, although she graduated at the top of her class, is assigned to ticketing cars at expired parking meters.

Zootopia police have been stymied by 14 cases of missing predators. When an otter goes missing, Judy convinces Chief Bogo she can solve it. Bogo gives her 48 hours.

Judy decides to enlist the help of Nick Wilde, a fox who lives up to the stereotype. He’s clever and sassy. Judy uses Nick’s shady practices to trick him into assisting her and the story begins to unfold as a true detective tale.

Rabbit and fox are fortunate enough to discover a license plate number in the sketchy file Judy’s been given. That plate number leads them to the DMV where Nick has a friend, Flash, who proves a big help. But Flash, like his co-workers, is a sloth. 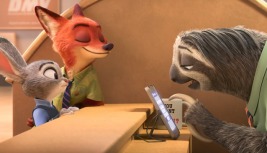 For anyone who’s waited at the DMV, you’ll relate. Nick and Judy get to the counter immediately. But…er…you’ll love the sloths. Watch Judy be her usual upbeat self. Watch Nick bait Flash into a conversation. Watch Flash finish a sentence. Watch Judy lose her cool. Watch Nick’s smug expression.

In their search for the missing otter, Judy and Nick play the roles of detective with everything they have in them. Judy proves she’s not a “dumb bunny.” Nick’s foxiness comes in handy, but he also begins to soften. They form a bond that could only happen in Zootopia, where predator and prey can live in harmony.

In the end, Zootopia shows us that we need friends who are loyal and always believe in us. We see that we can live in harmony with those who are different if all parties are willing to work together. Disney does it all so well. It’s a movie you’ll want to own so you can watch it whenever you need to see a great story told well. Or just for the laughs after a rough day.

One critic’s review named it “the best Disney movie in 20 years.” So hurry to the store and buy your copy.

Because you must see Zootopia now.

2 thoughts on “A Visit to Zootopia”